Due to all the publicity we gave to the Bothnia race a fellow from England decided to take his Pugsley and fly over to us in Luleå. Kevin is an adventures brit and stayed a whole week to get some proper winter cycling on ice and snow mobile trails. Little did we know that this winter would turn out to be the worst in 50 years. Warm weather and heavy rain made the organizers cancel the race. March usually is the best part of winter. Cold nights and sunny days make for epic winter cycling. But this year, fog and slushy snow. Kevin being stubborn rode the ice anyway. When the weekend approached i invited the british gentlemen home for dinner and some planning for the weekend. When i drove him back to his hotel the rain was poring and the forecast for riding on saturday was bad. But, when i woke up in the morning the rain was gone and a big yellow thing lit the sky, for the first time in weeks…

I called Sven and we decided to load the bikes and drive up to the Råneå river vally. The idea was to ride along the Ore trail for a few miles. It might just be hard enough to ride despite the warm weather. This was also a chance to check if the ore trail was possible to ride the whole 200 kilometers, a trip me and Sven been planning for a while. I was not.
After a few hundred meters of super soft wet sugar slushy snow we almost gave up, almost. Still the sun was shining and the thermometer said around +8°c we decided to give it a shot. It was a struggle but crossing a few lakes on the way made it a bit easier.

Slush on the ore trail. 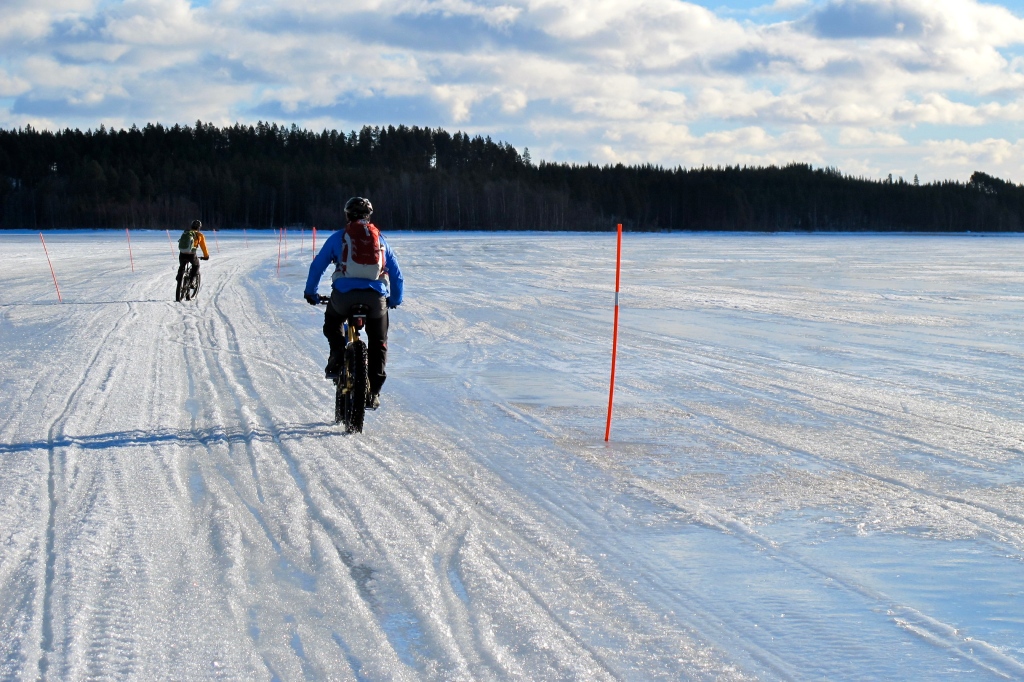 The ice was wet but easy to ride

The sides of the trail was super soft

When riding in these conditions tire pressure is the key

After 18 hard earned kilometers we reached the Aurora Safari Camp and Fredrik tagged along (on snowmobile) and we had some coffee and a chat in the amazing camp.

I think Kevin was quite satisfied even if he got a taste of spring instead of winter. It was great to get to know him, cycling makes the world a smaller place and despite cultural difference we are all the same. Kevin was the first winter cycling tourist in Swedish Lapland but sure not the last.

Thanks for dropping by Kev! I´m sure you will come back, hopefully with some friends. I promise to serve better weather next time. 😉

1 thought on “Kevin on ice”

I love hanging in the harbour. I miss sailing ⛵️ #thisisthesea