Winter is having a firm grip on our little arctic town. Loads of snow and handleable temperatures has made the the first weeks of 2018 pretty nice. It’s still early in the season but the archipelago is calling and i need to get out there. Both me and Andreas had The Wednesday off and we decided to check the ice behind Sandön (Sand Island), the big island that separate the inner and outer part of our 1 300 island archipelago.

I love this place and ride here a lot during summer. Lovely trails, beaches and singletrack. In the winter something totally different. Since there are a few year around residents there is a public road across the canal. So no dingy needed like in the summer. There are also a lot of summer cabins on Sandön and we relay on the owners to make way for the fat bikes with their snowmobiles.

The beautiful south side is where we were heading. The weather was perfect about -10 Celsius, sun rising and now wind. We found a decent trail along the shore line and hit it. 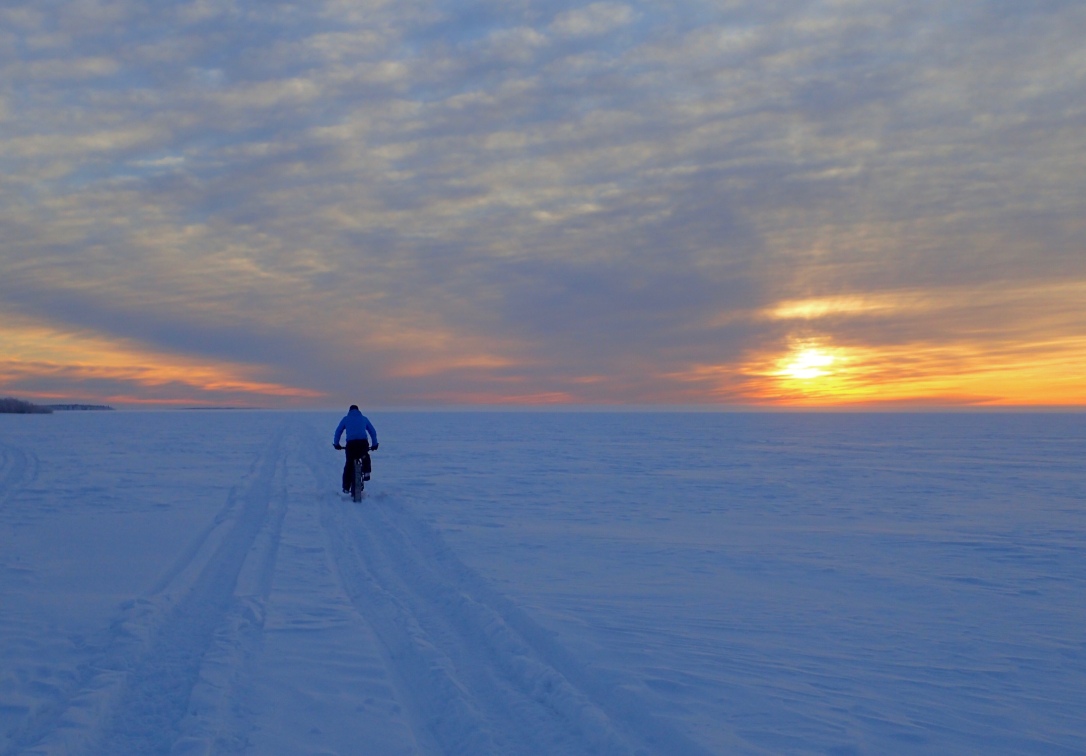 It turned out pretty damn soft. But we let the air out of our fat tires and decided too grind on. The light this time of year is unbelievable and it feels like riding out in to nowhere.

Riding soft snow is hard work, and when following a snowmobile trail you never really knows where you´ll end up. But to me thats on of the things i like with winter cycling. Riding a place you know still totally different than the last time you were here.

After a couple of hours the trails ended at a cabin but we went along the shore a bit further. When staying close to land it´s almost rideable. After about a kilometer we found a new snowmobile trail heading up on the island. Still soft but very beautiful.

The trail took us to one of the big bays that usually just are accessible from the other side of the island. From here there is a public road on the ice to one of the other islands further out. Turns out it just opened for the season. We made camp and had our well earned lunch. Coffee, Bullens sausages and some sandwiches.

Getting up on the road was a delight after grinding soft trails for three hours. The road goes a cross the island and connects to main land were we started. I´v been on this gravel road loads of times but during winter it´s the most beautiful.

We had an excellent Wednesday on the sea. It´s a bit early on the season to go far but this seams to turn out to one of the best in years. Soon the days will get longer and the trails will be harder and longer. Can´t wait to get out there again.

Thanks Andreas for joining me, feels good to have a fatty buddy who shares my love for riding.

Here´s an old edit from riding on the same place in a different season.

Kind of hard to believe. =)